You are here: Home / Blog / Divorce - Family Law / Is “Nesting” Right for Your Family? 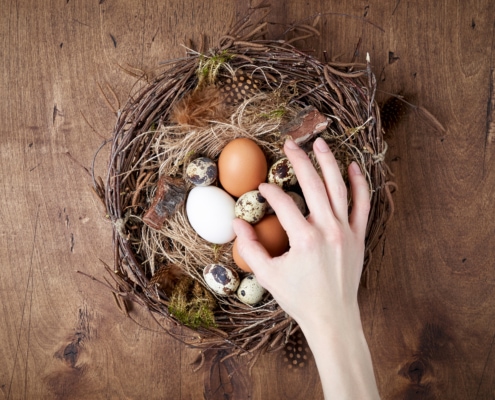 In our last post, we talked about nesting and how it could fit into a broader parenting plan. As we discussed, nesting is usually a temporary arrangement. It can offer children stability while parents transition from being a married couple to being two single parents. Today, we will look at two couples who tried nesting and see how it worked out for them.[i]

David and Emma are divorcing after 10 years of marriage. They have two children, four-year-old Sarah, and two-year-old Charlie. Emma is keeping the family home and David is renting a studio apartment nearby. Both parents are very involved with the children. Going forward, they want to split parenting time as equally as possible. They are interested in alternating weeks.

The couple attended marital therapy for a year before deciding to divorce. Since their decision, they have continued to seek help but have transitioned to “divorce planning.” Their  therapist, who has extensive experience working with families in transition, has advised them that very young children generally benefit from shorter periods of time with each parent. Another issue with their plan to alternate weeks is David’s current lack of space for the children in his apartment.

The therapist suggests that Emma and David think about a “nesting” plan which will keep the kids full time in the family home for a few months or so. After talking it over, they decide to try this. They set up a 3-4-4-3 parenting schedule. The children spend 3 days with one parent, then 4 days with the other parent, followed by 4 days with the first parent and 3 days with the second. Emma looked into the cost of renting a second small apartment. Eventually she decided instead that on her off days she would stay with her parents, who live nearby.

David plans to purchase a new home within the year. When he does, Emma will move back into the family home full time and the children will spend David’s parenting time at his new home. They will keep the 3-4-4-3 schedule, however, at least until Charlie turns 5 years old. After that they will reevaluate the feasibility of moving to alternating weeks.

Nesting with Teenagers: Jessica and Frank

Jessica and Frank have been married for 25 years and have recently decided to separate. Frank is going to keep the family home. Jessica will move full-time into a vacation home they bought a few years ago. Their three children are all in high school. Cassie is a freshman, Thomas a sophomore, and Kevin a senior. While the parents and the kids would all be fine with an alternating weekly parenting schedule, the number and variety of extracurricular activities each child has, as well as the fact that their parents will now be living about an hour apart from each other, makes that idea daunting.

After talking it over, Jessica and Frank decide that instead of having the kids go back and forth, they will do the traveling. They plan to alternate weeks at the main family home and weeks at the vacation home. By the end of the first year, Kevin will be away at college, Thomas will be in his last semester of high school, and Cassie will be getting her driver’s license. At that point the parents will move permanently into their respective separate homes. Since the distance between Jessica’s new home and the high school may make it too cumbersome for Cassie to alternate weeks for her two remaining years of high school, the plan is to have her spend summers and school vacations with Jessica and the bulk of the school year with Frank.

Other Considerations with Nesting Plans

The plans set out above are obviously just bare bones agreements. Fortunately, both of these couples are open-minded and have relatively adaptable children. With high school age children in particular, it is important to keep in mind that they may have summer jobs or other activities that could get in the way of everyone’s best intentions.  While some things can remain flexible, your nesting agreement should at least include the following:

It is not necessary to spell out all the details of your post-nesting plan, but you should commit certain pieces to a signed agreement. These include how long the nesting arrangement will last and how the parents will divide time after it concludes. Without a definite agreement on these two items, there is a higher chance for conflict going forward. If everyone wants to extend the arrangement beyond the original agreement, that is fine, but if only one parent wants to do that, things could get messy without an agreement ahead of time.  Usually after a few months to a couple of years, both parents and children will be more adjusted to the reality of divorce and ready to separate more fully.

Still have questions about nesting and parenting plans?   Contact one of our experienced child custody mediators for more information.

[i] These are fictional couples, crafted to have a blend of characteristics common to divorcing couples who face this issue.

Does Nesting Fit into Your Parenting Plan? Facing Divorce During the Holidays